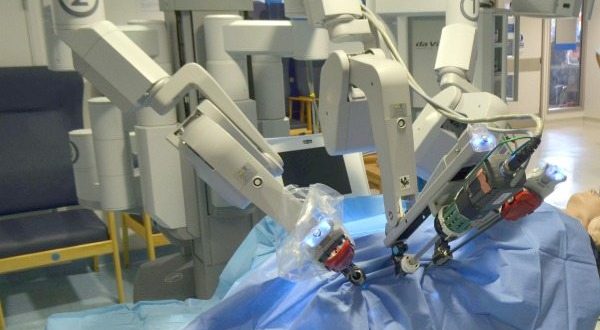 The Da Vinci robotic surgical system is an automated system that accomplishes all laparoscopy related surgical procedures through the use of a robot with four arms. The system is developed around the fact that technology can be used to add precision, comfort, accuracy and pain-less to minimally invasive surgery.

Why is it called Da Vinci Surgical System?

How does Da Vinci System work?

Where is Da Vinci system in being used in India/ Delhi?

The Da Vinci robotic surgery system is available in many parts of India. The All India Institute of Medical Sciences, Delhi was amongst the first government institutions to receive a Da Vinci robot.

Procedures for which the Da Vinci robot is being used in India include the following:

Who is a Da Vinci Surgeon?

The Da vinci surgeon is one who along with knowing the essentials of laparoscopic techniques also knows how to handle the robotic equipment and perform the surgery. In most cases, these surgeons have a certified document of training that authorizes them to use the system. Many online courses and real-time in-hospital courses conducted by the manufacturers of the Da Vinci robotic system – Intuitive Surgical, equip surgeons through a continual learning process.

This ultimately wins them the certificate for eligibility to undertake complete case series of robotic surgery on new cases. In-hospital training is usually imparted to teams of surgeons involved in laparoscopic surgery, who learn different aspects of using the Da Vinci robot and while the main surgeon controls the operation at the console, the others help in monitoring the patient and replacing the Endowrist instruments at the robotic arms according to the surgeon’s instructions.

The main advantages of using the Da Vinci robot are as follows:

There are a couple of risks involved in using the Da Vinci robot. These are as follows:

The Da Vinci robotic surgery system has received approval and clearance from the U.S. Food and Drug Administration and is being used in a large number of hospitals worldwide.

The Da Vinci surgery costs one-third more than general laparoscopic procedures. In case of complex surgeries wherein extra time and specialised skills are required in completing the process, the cost might be higher. The robotic surgery system is a one-off costly process which will neither be repeated nor required. In ninety percent of the cases, patients have gotten better with no complaints about pain or bleeding. Cases where complications arise during or after the operation have to be treated by extensive medication or an open surgery schedule at a later date.