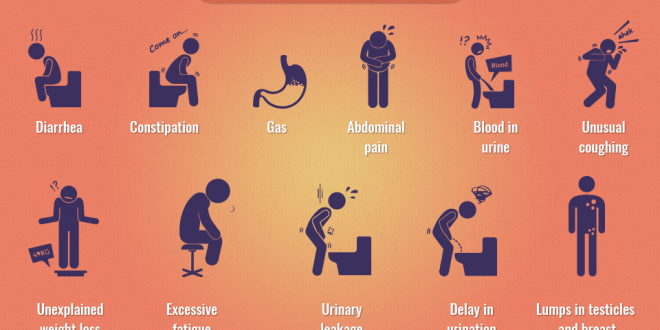 7 Early Signs of Cancer in Men

Cancer is among the deadliest ailments today in adults. Fortunately, there are some ways to avoid certain types of cancer. Maintaining a healthy diet reduces the possibility for development of certain types of cancer, while hereditary factors are beyond control. The signs of cancer typically depend on the size of cancerous growth and the type of affected organs or tissues. With further growth of cancer, nerves running around the affected organs and blood vessels also get affected.

According to a top oncologist,

The most promising way to fight cancer is its detection at the initial phase. This facilitates early treatment and controlling its growth.

Sudden changes in the bowel may indicate symptoms of cancer such as having constant diarrhoea, constipation, gas and abdominal pain. Another symptom of cancer changes in size or capability of bowel movement.

Blood in urine is an early sign of cancer in the bladder, colon or kidney. This type of cancer is most commonly found in former or current smokers, as compared to non-smokers. Blood in semen is also a sign of early prostate cancer.
Urinary tract infection, prostatitis and prostate cancer may also lead to blood in the urine.

A cough is commonly associated with smokers and people having a cold or allergies, but this is not always the case. A frequent cough with blood and shortness of breath are early signs of cancer in the lungs. A persistent cough without existing infection may be a sign of cancer.

Sudden and unexplained weight loss is one of the possible signs of cancer in men. If a person is losing weight without making changes in regular diet or duration of exercise, he needs to consult a good oncologist immediately.

A number of medical disorders and chronic ailments associated to fatigue as one of the symptoms. Excessive fatigue, though suggests that something is wrong within the body. With the growth of cancer, the body starts to feel overly tired even after carrying out a light activity. Excessive and unexplained tiredness even after a good night’s sleep becomes a sign of colorectal cancer among men.

Whilst ageing, urinary changes are seen in men but some signs may be indicators of prostate cancer. Some of the symptoms may include incontinence, urinary leakage, delay in urination, inability to urinate despite having an urge and straining during urination. Prostate cancer shows its presence in the men ageing 60 and older.

Lumps in Testicles or Breast/Chest

Breast cancer that is usually associated with women, is also found in men. Sceptical lumps in the chest are checked for its diagnosis. This is the foremost detectable symptom of breast cancer in men. Genes and exposure to radiation cause breast cancer. Men lying in the age group of 60+ are likely to have this cancer.

Previous Kava vs Kratom : All you need to know
Next How to Avoid Relapse After Addiction Treatment?
Privacy Policy | Terms of use | Sitemap
Copyright 2013-2023 © Credihealth Private Limited.