Blog » Health Blog » Living with Heart on the Right, Liver on Left: Case of Situs Inversus 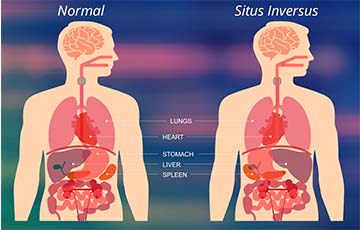 Living with Heart on the Right, Liver on Left: Case of Situs Inversus

Imagine waking up one day with a stomach ache and later discovering that all your inner organs are on the wrong side. This surprise of a lifetime was recently presented to a resident of Uttar Pradesh’s Kushinagar region.

Jamaluddin encountered the shock of living in a mirror body when he consulted a doctor for persistent stomach pain. He was recommended to undergo ultrasounds and X-rays which led to the unearthing of his flipped body. In the vocabulary of medical science, Jamaluddin was born with an extremely rare condition called Situs Inversus.

Let us understand what this condition is all about.

What is Situs Inversus?

Situs Inversus is a condition in which the internal organs in the chest and abdomen region are placed in the position of their mirror image.

It is a genetic condition in which the positions of the heart and the liver are flipped as compared to their normal places.

Situs Inversus is a very out of the ordinary state. Only 1 in 10,000 people suffer from this ailment. Nonetheless, it is not a modern disease. The condition was diagnosed and recognised in the year 1673. A surgeon named Marco Severino discovered the case of situs inversus. However, the ailment was given its title about a century later. The causes of Situs Inversus are solely genetic.

Advancements in the clinical discipline has allowed individuals with this ailment to lead a perfectly normal life. Situs Inversus has impacted the lives of several celebrities including Enrique Iglesias (Spanish singer), Catherine O’Hara (Actress) and Donny Osmond (American singer).

Through the Looking Glass – Particulars of Situs Inversus

If you do not look for it, you may not find it. The same is the case for Situs Inversus. This condition may not be recognised until a person is examined on the inside.

This implies that Situs Inversus does not cause any major complications as the organs, though rearranged, function properly. Thereby, it does not have a set of symptoms to identify it with.

As in the case of Jamaluddin, an individual may suffer from another ailment which would further lead to the discovery of this condition. A doctor usually diagnose situs inversus via X-rays, CT scan, MRI, ultrasonography or listening to the heartbeat.

The complications arise if a person with Situs Inversus has to undergo surgery. It is because the geometric coordinations would be problematic for the surgeon to operate on.

Dr. Shaskikant Dixit, a bariatric laparoscopic surgeon, who operated on Jamaluddin, said, “We found stones in his gallbladder. But it is extremely difficult to take out the stones if the gallbladder is located on the left side. We had to take the help of three dimensional laparoscopic machines to perform the surgery.”

Such hurdles may be involved in the case of situs inversus in the event of a major surgery.

A similar case surfaced at Fortis Hospital, Shalimar Bagh. A 52 year old patient named Sunil Dutt had been experiencing breathlessness and angina. The diagnosis revealed the atypical condition of situs inversus. The competent team at Fortis Hospital heeded to the complications and have been offering treatment to the patient.

Philosophically, each one of us is different beneath the skin but some are rare.

Situs Inversus is a birth defect in which the organs are repositioned in the place of their mirror images. This condition does not cause any barrier to a person’s overall health. For this reason, surgery to reposition these organs is not often advised by doctors. Having the knowledge about situs inversus is important prior to any surgery.

For more information or FREE personalized guidance, speak to a Credihealth medical expert at +918010994994.