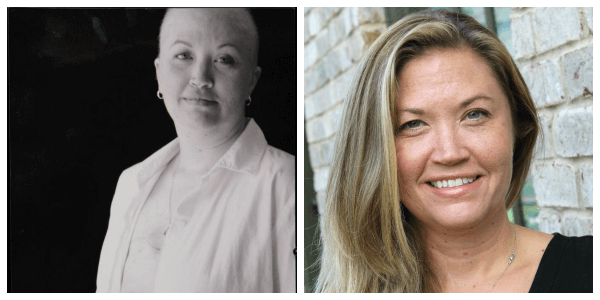 A platform for cancer survivors to share their brave stories, CrediHeroes is getting international limelight with a number of cancer survivor from different countries. Today, Melissa Burns, a 42-year-old documentary producer and a mother to 2 beautiful daughters, shares her breast cancer survivor story. This December, Melissa will be a 10 year survivor of Stage II-b triple negative breast cancer.

Melissa shares with us how she found out about her cancer and symptoms that didn’t quite feel right.

I was 19 weeks pregnant with my second daughter when I was in the shower and felt a lump. At first I believed the lump may be mastitis or a symptom of the pregnancy but in my gut I knew differently. I waited till my next ob/gyn appointment to talk with a doctor and during that time my hand kept being drawn to my breast where the lump was located.

Melissa’s path to finding a doctor she could rely on was a difficult one. As protocol suggests, her obstetrician ordered an ultrasound and biopsy.

I then received the phone call that changed everything. A physician to who my obstetrician had referred me officially diagnosed me December 23rd 2005. The oncologist was saying words like mastectomy and chemotherapy and all I could think of was my baby girl growing inside of me. This oncologist did not have the personality that I could enter into a six month relationship with, so lucky for me it was Christmas time and I had time to do some research.

I went for a second opinion in Boston, and met with a few oncologists before selecting my team at Yale in New Haven, CT. I also added a high-risk ob/gyn to my team because I was the first one to be treated at Yale for breast cancer while pregnant. My team advised me that the single mastectomy surgery and the first chemo cocktail I would be given would be safe for pregnancy. They said it was in a large enough molecule that it wouldn’t penetrate the placenta. I had no real choice but to trust them. After my mastectomy and four rounds of Adriamyacin and Cytoxin I gave birth – 6 weeks early – to my beautiful baby girl, Kaylie. Seeing her beautiful head of dark curls gave me the proof that the doctors were right. I was the only bald one so the chemo hadn’t touched her.

After having her baby in her arms, Melissa continued to fight the cancer.  She went on to have four rounds of Taxol and TRAM flap reconstruction. Being Triple Negative there were not any further treatment options.

I tried out a support group in my area of CT while in treatment but they were geared towards older women and it was difficult to get the support I needed. When treatment was over I started my own group for women 40ish and under. In three years we steadily grew and over 100 women came through my door. We helped each other through diagnosis and treatment but it was the issues of survivorship that tugged at my heartstrings. Women were having difficulty with body image, relationships, and ongoing side effects from Tamoxifen, Femara, and Arimidex. There were highly intelligent women in my support group with incredible careers that were now dealing with chemobrain and not able to recall words or thoughts when delivering presentations or lectures. The issues of survivorship are wide and varied. They are the reason I produced a documentary called Cancer? Seriously? The Untold Story About Life After Breast Cancer.

Melissa tells us that Breast Cancer will always be a part of her and it’s not because of the scars or other symptoms that she dealt with post cancer. It is because she is now linked to an amazing group of women who are warriors but, many of her sisters are still losing the fight.

I am also worried about my daughters. I have tested negative for every gene that we have testing for but worry my cancer was caused by a gene we haven’t discovered yet.

Melissa’s advice to everyone is – to know your body and trust your instincts.

Do self- breast exams and get your mammograms. If you are not comfortable with your doctor, find another one. You are your best advocate. Ask for help and support during treatment and beyond. Life does not return to normal when treatment ends and your hair grows back. Cancer survivors are often struggling more physically and emotionally after treatment. Be aware of this if you are family and friends and continue your support.

Thank you Melissa for sharing your story of bravery with us.