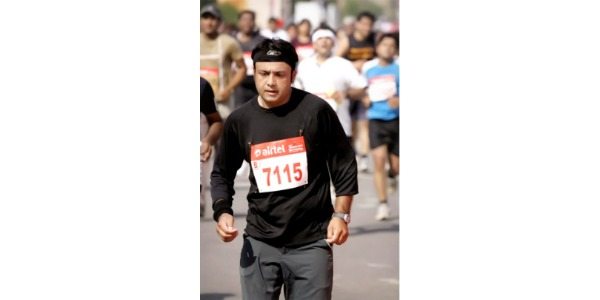 Meet Sidharth Ghosh, popularly known as Sid, a 36-year-old young Delhi man. Sidharth is an alumnus of Delhi Public School and FMS (Faculty of Management Studies), University of Delhi. He is currently working as the Project Manager for a French company, prior to which he has worked with IT giants like Patni and HCL. Read his Cancer Survivor Story here.

Being a fit marathon runner, Sid, his family and friends never imagined him getting seriously sick.

I was diagnosed with a rare type of cancer one month after I ran 42 kms full marathon in Mumbai in Jan 2014.

How It All Started: The Symptoms

On 27th February, I passed blood in urine which was an alarming situation for me (in medical terms it is called gross Hematuria). The initial blood, urine and ultra sound tests conducted by doctors showed everything normal hence no one was sure as to why I was passing blood in the urine; in fact it was only blood and no urine which I was passing which automatically stopped after 2 days. The other thing was worrying the doctor was that I had absolute no pain anywhere which ruled out the possibility of any kind of infection.

Once the CT scan was done the radiologist confirmed a large growth inside the kidney which is usually cancerous in nature and called Renal Cell Carcinoma in medical terms. The growth was of the size of a golf ball residing inside my right kidney covering more than half of it.

Considering the large size of the tumour, the doctor confirmed it would’ve taken at least 5 years for it to grow as large as this size. They were shocked to hear that Sid had been participating in marathons and doing all other physical activities without any health problems.

I went through a life saving surgery in March and lost one of kidneys with lots of other tissues. I am still going through scans and this will be done for the next 5 years before the doctors finally declare me cancer free.

In the interview with Credihealth, we asked him what he had to say about the state of support groups in India.

I think support group is something which is missing in India; I am connected to a few people but there is no support group as such which I tried looking for while I was in bed for 2 months. It is sad that people still consider it as a stigma. Another thing I observed that we are not fighting cancer alone but fighting the fear of cancer as well. I strongly feel a need for support groups since people tend to lose the battle even before it starts. I have been counseling a few people and I really find it challenging to change their mental state to be positive.  I saw a movie Fault in Our stars which talks about such support groups and I would like to create/ join one so that people can learn from each other’s experience and inspire each other as well.

After the initial shock, Sid decided to fight back and even started a blog called youcanfightcancer.wordpress.com to help and motivate other people. Now, he works closely with cancer support organizations like Cansupport, Cankids, RokoCancer etc., to spread awareness and raise funds.

A significant purpose for promoting CrediHeroes is to feature survivor stories of real people and remove the idea from the minds of the readers that “it can’t happen to them”. Cancer, in simple terms, is the abnormal growth of cells- it can happen to anyone. If your body is showing odd symptoms, find a doctor and get treated as soon as possible.

I think it is very important to have a healthy body and a healthy mind. I strongly believe you know your body the best so don’t ignore any symptoms like any unwanted growth, continued illness etc. You should have a balanced diet and eat seasonal vegetables they are best suited for you and be mindful of your family history since your genes could be more prone to certain kind of disease. In addition you should also exercise so that you do not become overweight.

Thank you Sidharth for sharing your story.

Previous Harmala Gupta’s story as a cancer survivor, CrediHero
Next How Do I Treat My Child’s Stomach Pain?