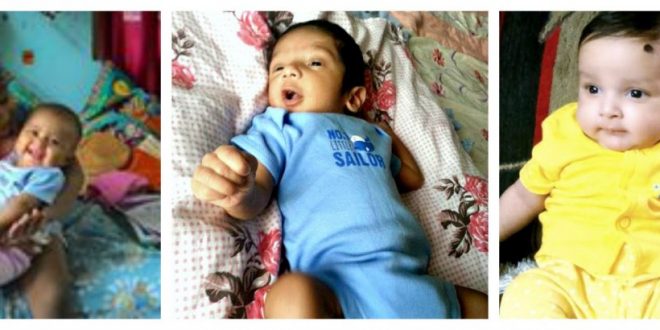 7 New Moms Club members share their experience having a baby through a common delivery procedure called C-section. While it was planned for some, for others it was a surprise.

I was waiting for normal delivery and the whole day I went through all kinds of normal delivery pains. But, by the end of the day, the doctor told me that the baby’s heartbeat is getting slow so we decided to go for C-section. It was painless before the baby’s birth but painful afterwards. The pain might go after few days but spinal pain is left for life due to anaesthesia and epidural injection is unforgettable. – Pooja Himanshu Khurana

I was advised bed rest since the beginning since there was no cardiac activity and later, low-lying placenta and other blood group issues.
Till the very day there were no signs of labour. When I had ultrasound, the level of AFI was damn low. We tried for normal delivery but couldn’t get through. Then I had my C-section. In the OT, the anaesthetist asked me

‘Kanika, how are you?’ I told him that ‘I was good’ and asked him how he was.

They all laughed aloud hearing my question and asked me ‘how can I ask him that in such a state…’ And then the process started and I delivered a baby boy.
– Kanika Rahul Khanna

I was having anterior wall low-lying placenta and high BP so my gynae suggested me for -section after 35 weeks, but when I went for my regular check-up, my BP was very high and my gynae asked me to get admitted immediately and decided to deliver one week in advance. I was nervous as my baby would be premature but excited as well as I’d be able to meet with my baby one week earlier. All the doctors and other staff members were very friendly. Even during the process, my gynae tried to cheer me up continuously. And after that, finally my bundle of joy arrived and I had forgotten everything. – Swati Agarwal

For me it was a horrifying process. But all’s well that ends well.

It was a very tough journey for my baby. My doctor asked me to plan after 37 weeks due to calcified and mature placenta. She advised to try for normal delivery, although my baby had a cord around the neck. The baby was small and could not grow much in the 9th month due to mature placenta. I was admitted on 19th night in the hospital and pains were induced via drip in the morning. 2 hours of drip and no sign of pain. My doctor then induced the pain vaginally, and told me that it’ll take an hour. However, it just took 10 minutes and I was in extreme pain. Due to contractions my baby was in stress with heart beat as low as 99 and was I immediately taken to OT for C-Section.

During this process, my baby passed poop and inhaled it.

Baby weighed 2 kgs and had respiratory issue, he was then admitted to NICU under observation for next 3 days. Baby was handed over to me on the 3rd day. With all this said and done, my baby was all normal with God’s grace. Thanks to my doctor who came as miracle to save my darling son. – Deepa Sushmit Sharma

It was a well-planned and negotiated date with my doctor (as she refused to operate on Sunday. Imagine! The operation finally got scheduled for 4 pm and I was shifted accordingly to the OT. This was my first time in the OT ever. Guess what? The doctor was there with the staff, but the anaesthetist was missing!

Finally she came running and they all came into action. First, 3 shots of anaesthesia were a miss! Finally, the 4th one did some wonder and I laid down. Something started happening in my tummy and I was chatting to anaesthesia – asking him when I would be able to eat next. The baby was out, he did his first eye lock in-between, crying with me, stopped for a fraction of a second to confirm it’s me, his mom and started crying again!

And now comes the climax. On one side, I had the anaesthetist and another side was the doctor. They started fighting and arguing about the delay. I swear, literal fight! Subsequently, I guess she was stitching also, I was in so much panic – what if she left something inside or maybe forget any damn thing in theirs. I am in OT mid-way my operation and this fight! On top of that, I was instructed initially to keep control of my BP. Even the staff intervened in-between and requested them to calm down. Finally, they declared it’s over, I was wondering what – the fight or my game over. This one instance lying in-between a fight during my operation gives me thrills even today while writing this. Happy and healthy though, enjoying life with Avi, my son – Ankita Kohli

My first baby was through C-section. During my second baby, the doctor said she’ll try for normal delivery. So I was hoping for normal delivery too. My EDD was 14th January 2015. My hubby was busy with his official things as a new batch was passing out on 27th Dec. During the passing out parade, he had to be there no matter what. While he was at the function, my baby started hitting on the earlier stitch. I tried controlling myself.

But the pain was unbearable.

I had to call my hubby and he was at home in no time. I had to travel 38 km for me to reach the hospital. Thankfully my doctor was there. All the preparations were done and I was operated within 20 minutes. I had no problem at all during me first C-Section and this one too was pretty easy. My little treasure made me forget all my pain. I was on my feet on the 2nd day and I asked my doctor to discharge me on the 3rd day, which after much persuasion, she did. I’m all well & happy & fit – Aar Tee

It was really unexpected for me. On 14th May, we went for a routine check-up at 8:30 PM. The doctor said the baby’s heartbeats are low so we have to take out the baby. It was an emergency C-section and he arrived at 11 PM. The nurse showed me, my baby when I was still in the OT unconscious. I couldn’t see him properly. Immediately afterwards, they sent him to NICU as he was premature delivery born in 35 weeks, The doctor wanted to keep him in observation for 48 hours. NICU was in different location when I woke up, first thing I asked for was my baby.

I couldn’t feel any pain as I was only thinking about my baby.

It was my birthday on 16th May and he was still in NICU. Whole day people were calling me to wish me but I was not answering any calls as I was so upset, crying and just wanted to see my baby. My husband called the doctor and finally, the doctor agreed to discharge him and on my birthday eve after 40 hours of waiting, I got my bundle of joy in my arms. In that 40 hours, I had not a complaint of pain, food or anything as I was only waiting for my baby and ignored everything. Hospital staff said my C-section was easy for them as I was the least complaining patient. – Garima Khurasia

The New Moms Club is home to thousands of moms. Click here to join the club.
Share

Disclaimer: This is a guest post. The statements, opinions, and data contained in these publications are solely those of the individual authors and contributors and not of Credihealth and the editor(s).