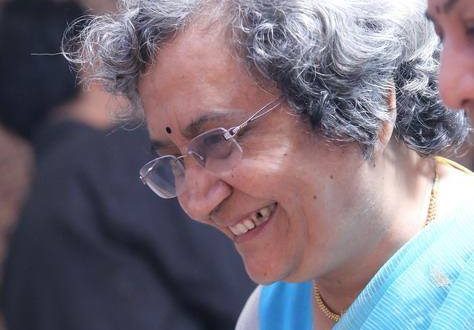 Ever since Aruna’s husband died in Dec’1998, she has been struggling. Both her kids were very young at the time but she was strong and gave them every opportunity she could as a single parent.

I had the will to carry on for their sake. I had to give them the best as I could all alone.

Aruna’s life was finally moving forward when suddenly she started feeling sick in April 2010. After numerous tests, Aruna was diagnosed with Ovarian Cancer, Stage III on 25th February 2011. Aruna tells us that this was around the time her son was in grade 12 and was to give his Board exams soon.

Aruna was heartbroken but she did what she had to do. She left her son alone in Delhi and went to Jaipur with her daughter. Even during this tragic time, Aruna did not give up as she was the only one who was supporting her kids. Aruna adds that her son passed the exams with flying colours.

I came back to Delhi in Aug’11. I went through all the process hoping to get cured once for all and carry on with my life and supporting my children. All these days I was praying vigorously that the pain should not return.

The Cancer and the pain returned in October 2012.

Aruna tells Credihealth in her interview,

This is when I thought of giving up so many times. The chemos started again in November’12 when there was a severe reaction of the medicines and I was severely sick. I had to be admitted in the hospital for 10-12 days most of which I don’t remember because I was hallucinating most of the time. I had to remain in bed for a long time. During this time my daughter gifted me a new phone with twitter and facebook so that I could read in my bed itself.  I was on the verge of giving up so many times. This is the time when I started following @Sai_ki_bitiya on twitter and read some of her poems. I had always been strong and faced all the challenges that life had given me, but at that point of time I was just not ready to fight. This is when I read her poem ” Phir musafir hue hain raaste”.  I read this again and again. After reading this poem I realized and understood that my whole life has been struggle. This is the way my life is going to be and I have to keep going on and on.

The chemos finished in August, 2013 and life was going on with Doctors prescribing tablets to delay the return of Cancer. Life was good. I had joined office and everything was fine.

In June, 2014,  Aruna’s  daughter’s wedding was fixed for 28th November, 2014 and the wedding planning was in full swing. They went to Varanasi in July, 2014, and had a wonderful time buying sarees for her daughter and for gifting family and relatives.

But the fun was not going to last.

In September 2014, during a routine follow-up cancer had returned.  The chemos had started, again.

This time in each cycle I had two chemos within a week. The chemos drained me physically and mentally. I did not give up and the planning and shopping continued with the same spirit. After three cycles of chemos, the Doctors planned the rest of the chemos so that I could attend my daughter’s wedding without any hitch. My daughter’s wedding took place on 28th November, 2014. It was the happiest and most memorable day of my life.

Chemo started again in December 2014. This time, Aruna’s platelets were very low and at one point it reached a dangerously low number – 10000. Chemotherapy sessions were delayed due to low blood counts. Finally, on 6th February 2015, the last of the remaining 3 chemos cycles were administered.

As of 28th February, Aruna is off Chemo sessions.

Being a cancer survivor, Aruna has maintained a positive attitude towards life. She has maintained a ‘routine’ during chemo sessions. For example, every day she takes a bath at 9 AM even while she might be just at home, she makes sure she always wears freshly washed and ironed clothes.

I never think of myself as a patient. During the last 4 years I have developed a new hobby – gardening which helps me a lot. Also, as I like knitting I have knitted and gifted sweaters to my colleagues’ children, friends’ grandchildren and relatives’ children for the past 4 years.

The above activities, Twitter and TV has helped Aruna divert her mind and not think too much about her disease.

Cancer has given a very different perspective to our lives. My children have come out very strong in this ordeal. In this fight against cancer. I cannot thank my mother, brother and sister-in-law enough.