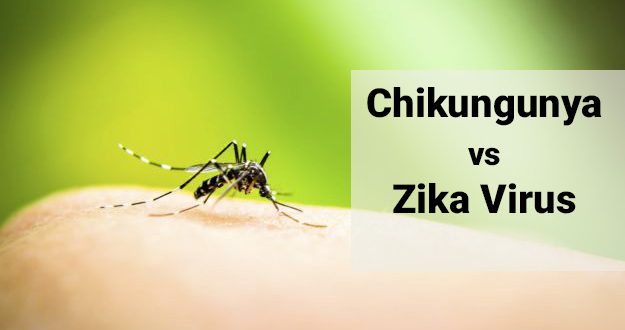 difference between chikungunya and zika virus

What is the Difference Between Chikungunya and Zika?

Chikungunya and Zika both are mosquito transferred diseases but are linked to each other through the commonality of their symptoms. Zika, like Chikungunya, is caused by the bite of the Aedes Aegypti and Aedes Albopictus mosquito, through which the virus is transmitted into the bloodstream.  In fact, the preliminary symptomspresented by both these viruses are so similar that it is difficult to diagnose on the basis of these alone. The incubation period for both the viruses falls between 2-12 days from the mosquito bite. Both Chikungunya and Zika are not transmitted through breastfeeding but run the risk of being transferred through infected blood transfusions. The severity of both does not prove to be fatal in case of most people.

The common symptoms for both Chikungunya and Zika include:

The difference between Chikungunya and Zika is based mostly on the severity of the common symptoms and symptoms which are present in one and not in the other.

Also, read about: Chikungunya vs Dengue.

In both Chikungunya and Zika, the patients are advised to take plenty of rest, drink enough fluids, and treat pain, fever, and other associated symptoms with common OTC medicines. All mosquito-borne diseases like Chikungunya, Dengue, Zika, and Malaria warrant that precautions should be taken to eliminate mosquito and larva breeding in the surroundings. Wearing full-sleeved clothing and using mosquito repellents also aids in prevention against such diseases.

Previous Is Chikungunya Contagious? Find Out!
Next Chikungunya Symptoms, Diagnosis And Prevention Tips