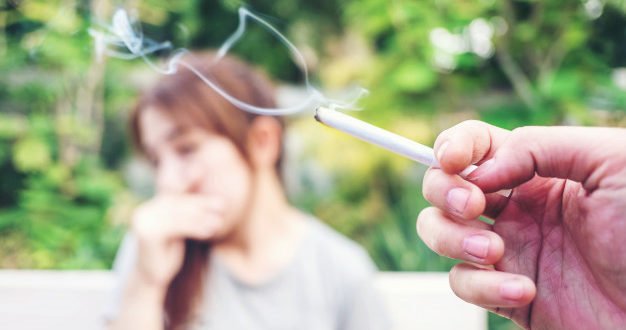 Did you ever think about this simple question? It is strangely true. Passive smoking is harmful than smoking, as it causes various health issues. To know more about this, let us get a deep insight into passive smoking. Let us also understand the dangerous effects of passive smoking.

Smoking is a practice in which a substance is burned and the resulting smoke is taken in, to be tasted and absorbed into the bloodstream. It is the inhalation of the smoke of burning tobacco which is encased in cigarettes, pipes, and cigars.

What is Passive Smoking?

Passive smoking is the inhalation of smoke, or environmental tobacco smoke, by persons other than the intended “active” smoker. It is also called second-hand smoking

It is the involuntary inhaling of smoke from other people’s cigarettes, cigars, or pipes.

The global tobacco epidemic kills nearly six million people each year, of which more than 6,00,000 are non-smokers. They are dying from breathing second-hand smoke. This means that non-smokers constitute one out of every 10 tobacco-related deaths.

What are the negative effects of passive smoking?

What is the risk to partners who have never smoked?

How to reduce the risk of passive smoking?

Fortunately, there are laws in place that limit passive smoking in public places, but outside of places where smoking is regulated. There are still many things you can do to lower your exposure.

Thus, passive smoking is more dangerous because the smoke that we inhale from a second-hand smoke has no filter and we unknowingly inhale all the harmful chemicals that the cigarette contains.

Related Read: Why Should I Quit Smoking?

Call +91-8010-994-994 and talk to Credi Medical Experts for FREE. Get assistance in the choosing right doctors in India.

The Dangers of Secondhand Smoke (https://www.healthychildren.org/English/health-issues/conditions/tobacco/Pages/Dangers-of-Secondhand-Smoke.aspx). Assessed on 29th July 2019

The Harmful Effects of Second-hand Smoke (https://www.healthlinkbc.ca/healthlinkbc-files/second-hand-smoke).Assessed on 30th July 2019

Why passive smoking is worse than smoking (https://www.hindustantimes.com/health-and-fitness/why-passive-smoking-is-worse-than-smoking/story-OEi31jnnv5BVlGKYKQUhzK.html) Assessed on 30th  July 2019

Previous Want To Ease Social Anxiety Disorder? Let Us Help You
Next Neuroendocrine Tumor – Irrfan Khan Suffering From a Rare Kind Of Cancer