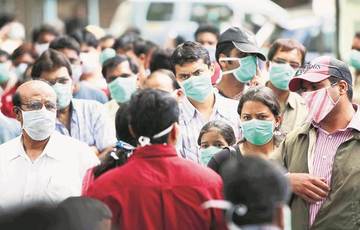 All You Need To Know About Swine Flu Outbreak in India

There is a Swine Flu break out in Rajasthan – one of India’s most visited tourist spots. The city is on every traveler’s list, with rambling castles and glitzy places like Jaipur and Jodhpur. Swine Flu is a fatal influenza infection that affected more than 10,000 people across 74 nations in 2009. After it was identified the disease has spread to the UK.

According to government official record, nearly 350 peoples were infected by swine flu. Doctors have said that the ongoing extremely cold climate in Rajasthan has aided in the spread of the H1N1 virus never. Swine influenza is caused by a strain of a virus, known as the H1N1 influenza infection, as per the NHS. Approximately 76 individuals have died after getting infected with H1N1 virus which accounts for a quarter of deaths caused by swine flu in 2019. Jodhpur was one of the most affected in the state where 23 of the 76 deaths were recorded. As per government records, no travellers in the zone had come down with the infection.

A state health representative stated that around 8,700 individuals were screened for swine flu this year, and 1,976 tested positive. The present count and figures have doubled from the previous year’s record. The number of people affected by swine flu was 750 in January 2018, and among them, 53 people died in the same month due to the flu. The representative also stated that a group from the National Center for Disease Control has arrived to Jodhpur to investigate the flu outbreak.

Dr. Raman Sharma – a senior professor at SMS Medical College, Jaipur, stated that swine flu is a seasonal disease and the climate aids in the multiplication of the virus.

Rajasthan is only a depiction of the general picture in India in this case, as the death rate due to swine influenza has increased to 169 this year while 4,571 individuals have been diagnosed with the infection, with Rajasthan representing more than 40 percent of the infected cases. As indicated by the authorities, Rajasthan recorded 1,911 infected cases and 75 dead, followed by Gujarat with 600 affected cases and 24 deaths. Delhi has been identified as the third most affected state with 532 individuals being affected by the H1N1 virus.

Studies show that the virus strain infects the respiratory system and the signs and symptoms may be a bit more severe than common flu. Signs and symptoms generally appear after one to three days after getting in contact with the virus. It’s like a typical, progressively regular influenza, yet side effects will, in general, be increasingly severe, and it could be profoundly severe. After the infection was identified in the UK a week ago, it is vital to know about the signs and indications of swine influenza.

Though most of the swine flu symptoms resemble common viral infection, watch out for these specific infections, especially during the winter seasons.

One of the more typical cautioning indicator of the disease is reddening of the eyes. Having red or watery eyes could be an early indication of swine influenza contamination. All swine influenza side effects are similar to common cold, including red eyes, however, in this flu, it’s a bit more serious. If your eyes are redder than expected, and you have a mix of other influenza side effects, you could be in danger of the infection.

Some of the other common Swine Flu symptoms are:

With the count going up, recently the ministry of health held a gathering with the states and approached them to reinforce their surveillance for early recognition. It was also requested that they keep beds held in medical clinics to manage extreme cases. The authority said the states hadn’t made any demands regarding diagnostic kits, drugs, and other requirements to manage the issue. Further, states have been approached to issue warnings. Delhi government additionally has issued a warning in perspective of the rising instances of swine influenza.

If you are diagnosed with swine flu, you should avoid going out and should take adequate rest. Rest helps in enhancing the immunity level of your body

In the event of the swine flu outbreak, the authorities suggest some precautionary measures and recommendations when you are infected by the disease.

The common causes of Swine flu are:

Below are a few recommendations which could prevent the disease from spreading.

If you feel any symptoms listed, do consult a Swine Flu Doctor nearby or book appointment here-