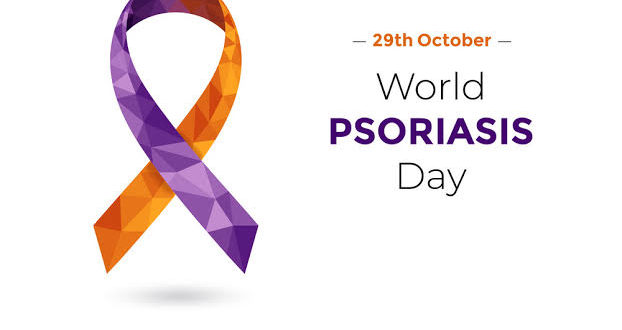 It is 2019 and we are still fighting for equality in all aspects. One such notion is facial equality or what we consider discrimination against how one looks. This subject affects patients suffering from skin diseases. Classified among such diseases is very prevalent, yet rarely discussed ailment called Psoriasis.

29th October marks World Psoriasis Day. This day is observed to encourage awareness about the disease that affects nearly 125 million people on a global level. To honour the patients battling psoriasis, let’s address this lack of communication.

What is World Psoriasis Day?

Before we set to study the significance of today, aka World Psoriasis Day, it is essential to understand the basics of this disease.

Psoriasis is a type of chronic skin condition. It impacts the pace with which skin cells develop. In psoriasis, cells on the surface of the skin get built far more rapidly, causing reddening, itching, inflammation, scales and patches.

World Psoriasis Day is observed to acknowledge the challenges faced by the affected community. On an international platform, organisations aim to increase familiarity around this issue.

In India alone, this condition is prevalent in 0.44-2.8% of the population. Irrespective of such high numbers, there is little awareness of the symptoms, causes and treatments of this disease. This dearth in recognition makes it difficult for both clinical and non-clinical sections to manage the disease.

The effects of the symptoms on one’s skin lead to numerous social stigmas. The findings of a global survey named ‘Clear About Psoriasis’ states that 48% of psoriasis patients have suffered in their professional lives due to the disease and its stigmas. The same study also discovered that stigmas of psoriasis have impacted the personal relationships of 30% people.

The creation of such stigmas is a result of the information gap.

The theme for this year is “Let’s get connected”, indicating a need for all strata of the society to connect amongst each other. Space, where all individuals feel included, acceptable and safe, is the need of the hour. And this space is what World Psoriasis Day aims at.

The patients and families of those affected by psoriasis encounter various challenges on an everyday basis. One of the biggest challenges is the refusal to accept skin conditions as a health issue. Patients face discrimination in all the social spheres due to this condition.

It was also noted that though some empathy and support was shown the society, in general, is sceptical to catching the condition. People are worried that touching or coming in close contact with someone with psoriasis would affect their health. According to a study, in India, 18% of psoriasis patients have been directly asked whether the condition was contagious. More so, nearly 36% of patients have admitted that they felt ashamed of their looks and skin.

The fact is that psoriasis is a non-communicable disease (NCD). It is as simple as having any other medical condition, so the bias is not required at any space, with anyone.

Another challenge faced by the psoriasis community is the lack of research on the medical fronts. So far, the research conducted on the Indian population is based on hospital-based data and that too mostly from North India. A more substantial investigation is needed on this subject because the impressions of psoriasis differ ethnically, geographically and environmentally.

Psoriasis is farther from being a rare condition. The disease is capable of developing at any age. However, it starts affecting individuals between 15-25 years of age. The male population is more prone to this condition as compared to females.

For nearly a decade, World Psoriasis Day is commemorated every year on 29th October. The lack of information on this subject needs to be bridged and more extensive comprehensive research should be done.

Are you suffering from the same disease? Check out the list of Best Dermatologist in India and get a priority appointment or book your appointment with Credihealth here