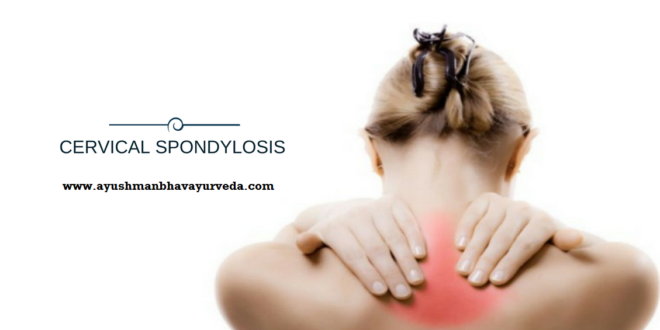 Cervical spondylosis is a common degenerative condition of the cervical spine which is caused by age-related changes in the cushion between the joints of the neck and the neck bone. It is also called as Osteoarthritis of neck. In this disease intervertebral disc which acts as a cushion between two vertebrae gets damaged due to age-related changes or other reasons. As disk degeneration occurs, movements of neck get restricted; also edges of vertebra get damaged & these changes increase pressure on nerves originating from cervical vertebrae. Due to this, there are many symptoms found in this disease.

According to Ayurveda, this condition occurs due to Sandhigata Vata of Neck. Vitiated Vata dosha causes the following symptoms.

Pain in the back of neck, shoulder, and arms, stiffness of the neck and even paraplegia occur due to this condition. The movement of the spine generally aggravates the pain of the neck.

Pain along the arms and fingers while standing, sitting, coughing and tilting the neck backward, Problem in lifting the arm or grasping something firmly, Headaches which occur mostly at the back side of the head as well as Feeling dizziness or loss of body balance is often found as the symptom in this disease.

Tips for treatment of Cervical Spondylosis

Dr.Yogesh Chavan is renowned Ayurveda Physician from Nashik, India. He is also a passionate blogger with the motto to spread Ayurveda Sciences to the community. He is spreading Ayurveda & health knowledge through articles in many newspapers & his blog www.ayushmanbhavayurveda.com . Dr. Chavan is an expert in Ayurveda medicine & panchakarma treatment. His work & sound knowledge in this field has been acknowledged by many institutes.